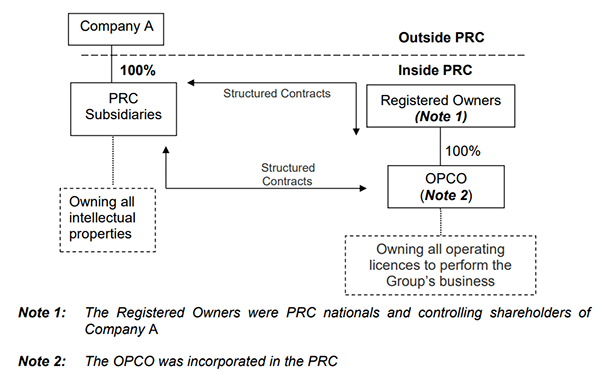 The Exchange’s approach to the listing of applicants using VIE structures is set out in its Listing Decision 43-3 which was first issued in 2005. It has been updated a number of times. The Exchange generally allows listing applicants using a VIE structure (also known as “Contractual Arrangements” or “Structured Contracts”) to list provided that it is satisfied as to the reasons for adopting the structure and the listing applicant meets the requirements set out in that Listing Decision. VIE structures are normally only accepted for listing where they are used for restricted businesses. Where a VIE structure is used for an unrestricted business, the Listing Division will normally refer the case to the Listing Committee.

Under the disclosure-based approach, the Exchange will not consider an applicant using a VIE structure to be unsuitable for listing if it has complied with all relevant PRC laws and regulations. The listing decision requires appropriate regulatory assurance to be obtained from the relevant regulatory authorities. In the absence of such regulatory assurance, the applicant’s PRC legal counsel must include a statement in its legal opinion to the effect that all possible actions or steps taken to enable it to reach its legal conclusions have been taken.

The PRC legal opinion must also confirm that the structured contracts would not be deemed as “concealing illegal intentions with a lawful form” and thus void under PRC contract law.2 This requirement was added in November 2013 following a ruling by China’s Supreme Court in October 2012 that arrangements which sought to give control to Chinachem Financial Services, a Hong Kong company, over a shareholding stake in China Minsheng Banking Corporation, were invalid. The court found that the arrangements had been entered into with the intention of circumventing restrictions under PRC law on foreign investment in China’s banking sector and were thus invalid and unenforceable since they “concealed illegal intentions with a lawful form”. Some commentators have argued that the case undermines the viability of the VIE structure. However, the issues in the Chinachem decision were different to those arising in a typical VIE structure. For example the case was concerned with the validity of entrustment arrangements which are not normally used in a VIE structure.

Listing applicants which adopt a VIE structure for restricted businesses are required to demonstrate that they have taken all reasonable steps to comply with all applicable PRC rules (other than the restriction on foreign ownership).

Where PRC laws and regulations specifically prohibit foreign investors from using agreements or contractual arrangements to gain control of or operate a foreign restricted business (e.g. on-line gaming business which is subject to GAPP’s notice 133), the PRC legal opinion on the structured contracts must:

The Exchange also expects the Contractual Arrangements to be narrowly tailored to achieve the applicant’s business aims and minimise the potential for conflict with PRC laws and regulations.

The listing applicant using a VIE structure and its sponsor are required to:

The Exchange revised Listing Decision 43-3 in August 2015 to note heightened concerns over the legality and validity of VIE structures to hold interests in PRC businesses which are subject to foreign ownership restrictions following publication of the Draft FIL. The amendments encourage listing applicants which use structured contracts to hold interests in PRC businesses to contact the Exchange at the earliest possible opportunity to seek informal and confidential guidance. The undertakings typically required by the Exchange will be to ensure that the listing applicant is controlled by PRC nationals. The aim is to ensure that the listing applicant will not be regarded as controlled by foreign investors which are prohibited from investing in certain industries and subject to restrictions on investing in others. The types of undertakings typically required by the Exchange are as discussed above.

Listing applicants using Contractual Arrangements for the entire or part of their business are required to disclose the following information in the prospectus:

Disclosure of the structured contracts (other than the risk factors associated with them) should be presented in a standalone section.

The listing of PRC companies often involves properties situated in the PRC. Despite the rapid development of the property market and title registration system, many issues relating to titles of PRC properties remain unresolved. Therefore, potential PRC listing applicants may face difficulties in evidencing their ownership in those properties due to uncertainty involved in the application process for the relevant land use right certificate and/or building ownership certificate.

The Exchange issued a guidance letter in relation to the requirements for title certificates of PRC properties (HKEx-GL19-10). Below is a summary of the guidance letter:

Practice Note 12 of the Listing Rules provides that where the issue of a land use right certificate is pending, a properly approved land grant or land transfer contract in writing accompanied by a PRC legal opinion as to the validity of the approval may be acceptable as evidence of a transferee’s pending title to the land to be granted or transferred.

3 “Notice Regarding the Consistent Implementation of the ‘Stipulations on “Three Provisions”’ of the State Council and the Relevant Interpretations of the State Commission Office for Public Sector Reform and the Further Strengthening of the Administration of Pre-examination and Approval of Internet Games and the Examination and Approval of Imported Internet Games” (Xin Chu Lian [2009] No. 13) published jointly by PRC General Administration of Press and Publication, National Copyright Administration, and National Office of Combating Pornography and Illegal Publications on 28 September 2009.