One Belt One Road 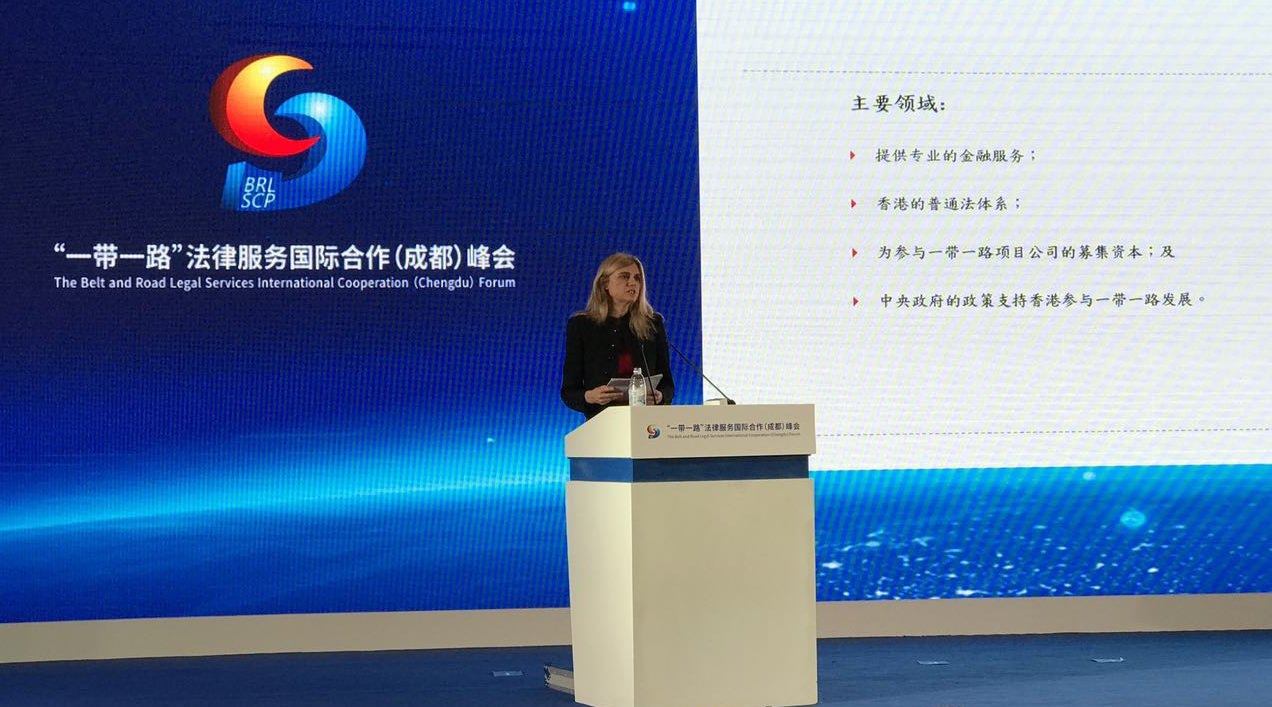 China’s Belt and Road initiative covers 69 countries, around 65% of the world’s population, and aims to encourage economic co-operation among, and economic development in, countries in the Belt and Road region. So what is Hong Kong’s role in the initiative?

Hong Kong’s position is unique: it is an inalienable part of China, but under the “One Country Two Systems” framework it retains its own legal system with control over its economic and financial affairs. Hong Kong’s lack of restrictions on capital flow, currency convertibility and simple low tax regime allow it to play a key role in facilitating investment under the Belt and Road initiative.

Hong Kong has a number of other advantages as a centre for raising capital for Belt and Road initiative-related projects. Geographically, Hong Kong is located at the mouth of the Pearl River Delta Region in the southern part of China and it stands on the major trade routes that run through Asia. In terms of its cultural advantage, Hong Kong is a cultural centre populated by many different nationalities and persons speaking a number of different languages. To succeed, the Belt and Road initiative ultimately requires not only economic connectivity, but also a cultural one.

The key factors which will allow Hong Kong to facilitate Belt and Road projects are:

Hong Kong has become China’s most international city and one of the world’s leading international financial centres along with London and New York. In 2016, the Hong Kong Stock Exchange (the Stock Exchange) raised more funds in initial public offerings than any other exchange world-wide[1].

Hong Kong is the world’s largest centre outside Mainland China for issuing debt denominated in renminbi (RMB). It is also well positioned as the primary offshore RMB debt centre for infrastructure investments, which include structured debt and infrastructure bonds.

Hong Kong is therefore in a position to serve as a “super-connector” between Mainland China and the rest of the world, and to help to bring together the strengths of Belt and Road economies.

Hong Kong’s internationally recognised legal system based on English common law has made it a very attractive place for Mainland companies to raise funds and for companies from around the world to invest in China.

A large number of infrastructure and financing contracts between parties in different parts of the world are being entered into under the Belt and Road initiative. With its trusted legal system, Hong Kong law is an obvious choice for the law governing projects under the Belt and Road initiative. Hong Kong also has a key role to play in dispute resolution and has particular expertise in arbitration.

The Belt and Road initiative involves multilateral negotiations between Mainland Chinese and foreign enterprises. Hong Kong lawyers have a linguistic advantage and are experienced in serving multi-jurisdictional clients in complex cross-border matters. The Hong Kong legal profession is thus well placed to assist in the structuring of investment projects under the Belt and Road initiative.

A huge amount of capital will be needed for the Belt and Road initiative.

In addition to the Chinese government’s promise that its public banks will take the lead in underwriting projects, the scale of the Belt and Road initiative offers plenty of opportunities for private financing. The Asian Development Bank has estimated an annual funding shortfall for Asian infrastructure projects of US$750 billion through 2020.

As one of the world’s leading financial centres, Hong Kong can play a leading role in the fundraising that will be required for the Belt and Road initiative. A key Hong Kong initiative aimed at facilitating this was the establishment of the Infrastructure Financing Facilitation Office (IFFO).

Established in July 2016 by the Hong Kong Monetary Authority (HKMA), the IFFO is not an investor itself, but instead provides a platform that enables interested partners to collaborate in identifying infrastructure investments and their financing opportunities. Through their work, IFFO will identify any impediments to attracting infrastructure investments and their financing. Where appropriate, it will recommend ways to address these issues to help make relevant projects more feasible.

In December 2016, the HKMA also signed a Memorandum of Understanding with the Export-Import Bank of China and the China Development Bank Corporation establishing a strategic framework for co-operation on facilitating the financing of infrastructure projects via the IFFO platform. As of July 2017, the IFFO has more than 60 partners, including development banks, public sector investors and private sector investors including, banks, insurers, asset managers, project developers and professional service providers.

In 2016, Hong Kong raised the most IPO funds worldwide, raising US$24.8 billion.[2] The depth of liquidity in the Hong Kong market and analyst expertise in the China market are the key draws for Mainland Chinese companies looking to list offshore. Hong Kong plays host to some of the world’s largest IPOs by Mainland companies – Postal Savings Bank of China, for example, raised US$7.4 billion in its September 2016 IPO in Hong Kong, the world’s largest IPO since the Alibaba Group Holding’s 2014 IPO on the New York Stock Exchange.

More recently, in July 2017, the Bond Connect scheme[5] was launched, so as to enable Hong Kong and international investors to invest in the China Interbank Bond Market (CIBM) and Mainland investors to invest in the Hong Kong bond market. Currently, only northbound trading is allowed, and according to the HKMA and People’s Bank of China, southbound trading will be explored in due course.

Further, the Hong Kong and Mainland regulators plan to extend the mutual market access arrangements between Hong Kong and Mainland China markets to cover other products, such as Exchange Traded Funds (ETFs), and there are plans to launch “Primary Equity Connect”, a scheme which would allow investors to subscribe for IPO shares through the Stock Connect schemes.

Listing on the Stock Exchange

In April 2017, the Securities and Futures Commission (SFC) announced factors it will consider when reviewing applications by infrastructure companies to list in Hong Kong.  The SFC has the power to object to a company’s listing if it considers that the listing is not in the public interest and in other limited circumstances.

The SFC’s aim is to facilitate the listing of infrastructure project companies while ensuring investor protection.

According to the announcement, the SFC may allow a listing even where the investment risks cannot be adequately addressed by disclosure alone where the following mitigating factors are present:

It is not necessary for all of these factors to be present.  Other factors may also be relevant and may be submitted for consideration.

A major advantage of a Hong Kong listing is the ease with which further funds can be raised after listing. In 2016, companies listed on Hong Kong’s Main Board raised HK$145.9 billion through share placings and HK$45.8 billion via rights issues. The mechanism of top-up-placings provides a very convenient method of fundraising for listed companies. There is no requirement for an offering document. If the number of shares involved is within the company’s existing mandate to issue new shares, there is no need for shareholders’ approval.  The fundraising can thus be completed extremely quickly.

In summary, a listing on the Stock Exchange can offer companies involved in the Belt and Road initiative a way to raise funds through an IPO and opportunities to continue to raise funds via placings and/or rights issues.

A New Third Board

There have been calls for the establishment of a new third board in Hong Kong to attract more tech companies to list in Hong Kong. In 2014, Hong Kong missed out on the listing of Chinese tech giant Alibaba Group because its management structure was considered to be in breach of Hong Kong’s “one share one vote” principle.

This June, the Stock Exchange published its New Board Consultation Paper[7] setting out proposals for the establishment of a New Board for New Economy Companies, separate from the Main Board and the GEM.  The proposed New Board would allow the listing of New Economy companies with weighted voting rights to list in Hong Kong.  New Economy sector pre-profit companies and Mainland Chinese companies that wish to list on the Exchange as a secondary listing venue would also be allowed to list.

The Stock Exchange has owned the London Metal Exchange (LME) since 2012, and LME is the world’s largest market in metals futures contracts.

According to its 2016-18 Strategic Goals, the Stock Exchange plans to extend its existing global price benchmarks in commodities that it owns through the LME, and attract international and Mainland investors to those products. Hong Kong also aims to become the Asian Gold Pricing Centre, and on 10 July 2017 Offshore RMB and US dollar Gold Futures were launched on the Stock Exchange to strong debuts.

The Belt and Road Initiative will further drive the internationalisation of the RMB which will in turn encourage greater cross-border investment. The Stock Exchange’s 2016-18 Strategic Goals include the establishment of a ‘Bond Connect’ scheme to facilitate cross-border capital flows in the underlying RMB cash bond market. Northbound trading under the Bond Connect scheme commenced in July this year.

Hong Kong has an active and liquid private sector bond market. In 2016, Hong Kong dollar-denominated bonds raised a total of US$21.4 billion, an increase of some 74% on 2015 and the highest amount raised since 2007. The dim sum market (the issue of renminbi-denominated bonds in Hong Kong) dropped to 146.8 billion RMB in 2016, down 17.6% from 2015, due largely to the devaluation of the RMB against the US dollar. Hong Kong nevertheless remains an important market for the issue of renminbi-denominated debt.

Hong Kong is the premier offshore RMB centre and has the largest pool of RMB outside Mainland China. It is thus in a prime position for fund raising denominated in RMB.

Hong Kong is Asia’s premier asset management centre and these funds also provide a source of finance for companies looking to raise capital. Particularly noteworthy is the Mutual Recognition of Funds Scheme[8] established between Hong Kong and Mainland China which enables Hong Kong domiciled funds that have been authorised by the Hong Kong authorities for retail distribution to be sold in Mainland China under a lighter regulatory approval process (and vice versa for Mainland authorised funds).

In May 2017, Mass Transit Railway (MTR) Corporation announced that it will collaborate with partners in Mainland China to explore Belt and Road-related opportunities[12]. MTR’s shares immediately rose on the news.[13]

As an international financial centre with strong support from Mainland China and from the international community, Hong Kong is ideally positioned to manage Belt and Road related investment projects and to act as a connector between investment projects, investors and service providers. Hong Kong’s fund raising and financing capabilities, expertise in infrastructure development and independent legal system mean that Hong Kong can help build a bridge between Mainland China, other countries under the Belt and Road initiative, and the rest of the world.

To support the Belt and Road initiative, Charltons co-ordinated with Grandall Law Firm in organising the Belt and Road International Forum in Chengdu, China held on 29 July 2017 and signed a Cooperation Charter in relation to the “Belt and Road” Legal Services along with 32 other law firms from 20 countries and regions attending the Conference.

Charltons advises on Hong Kong law and on international corporate finance transactions with a focus on the capital markets in Hong Kong.

Super connector between China and world

Hong Kong role in one belt one road plan

Hong Kong link between one road one belt countries

Charltons one belt one road presentation