Benefits of a Hong Kong listing

B shares conversion to H shares

Regulation of Red Chip Listings: Circular 10 – the M & A Rules

The listing of China Zhongsheng Resources Holdings in 2012

A typical VIE structure is illustrated in the following diagram:

In the diagram above, the domestic operating company (or OPCO) is the VIE.

Typical contents of contractual arrangements between VIE and the WFOE

In the long term, the importance of VIE structures is expected to diminish as the Chinese government loosens foreign investment related regulations.

Implications of the Draft FIL 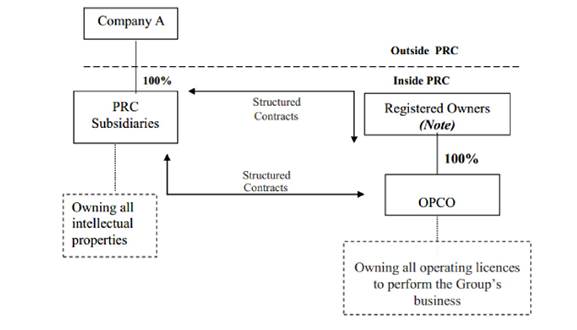 The Registered Owners were controlling shareholders of Company A

The Listing Decision notes that:

Pre-IPO investors can exercise anti-dilution rights at time of IPO if:

Example of corporate actions/changes in articles

Other documents which must be submitted with the listing application include:

Restriction on Disposals of Shares by Controlling Shareholders

Restriction on New Issues of Shares

What is Inside Information?

Key elements of the definition

The three key elements of the definition are that:

Examples of possible Inside Information (Non-Exhaustive)

4 situations where companies are not required to disclose inside information:

If confidentiality is lost or information is leaked, company must announce the information as soon as practicable.

The SFC Guidelines focus on the responsibility of officers, including non-executive directors, to ensure that appropriate systems and procedures are put in place and reviewed periodically to enable the company to comply with the disclosure requirement. Officers with an executive role also have a duty to oversee the proper implementation and functioning of the procedures and to ensure the detection and remedy of material deficiencies in a timely manner.

Obligation to respond to HKEx

Practising accountants of good standing; independent of the PRC issuer under the Companies Ordinance and in accordance with the statements on independence issued by the International Federation of Accountants.

Timing of Distribution of Annual Report

Definition of transaction includes (among others)

Consequences of entering into a notifiable transaction

Notes to the table

As soon as possible after the terms of a notifiable transaction have been finalised, the listed issuer must:

Note: a wholly-owned subsidiary of a listed issuer is not a connected person.

Definition of “Associates of an individual”

Definition of “Associates of a Company”

The Exchange has the power to deem a person or entity as an issuer’s connected person where:

Connected Transactions where there is no transaction with a connected person

They are usually transactions in a group’s ordinary and usual course of business.

There are a number of exemptions from the connected transactions requirements including (among others):

Listed companies are required to adopt rules governing dealings by directors and supervisors in their listed securities on terms no less stringent than the terms set out in the Listing Rules.

Listed companies must establish a procedure requiring directors and supervisors to give written notification to the chairman or a director designated by the board and receive a dated written acknowledgement before dealing in any securities of the listed company.

The Issue of Secondary Listing