An update on China company and securities law 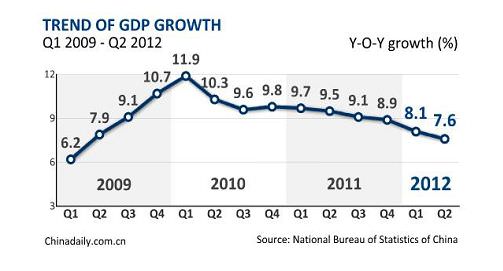 The Economy: Not By the Numbers

OR, Transition to service-based economy? 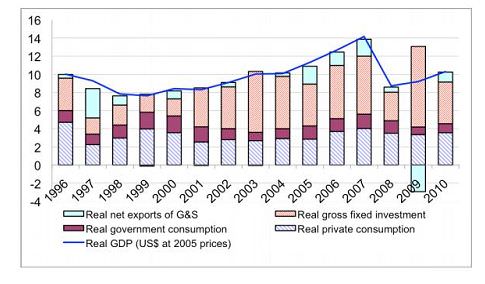 Note: Shaded regions in each bar show the contributions (in percentage points) of each component to total GDP growth. 2010 data are EIU estimates.

Figure 4. Shares of Private Consumption and Investment in GDP (in percent) 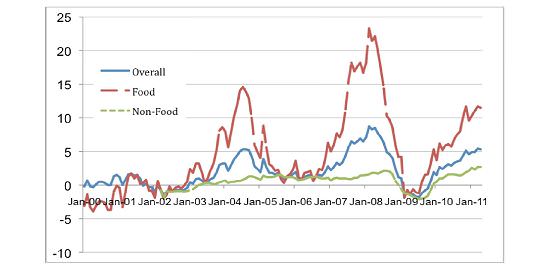 Figure 5. Labor Income as Share of National Income (in percent) 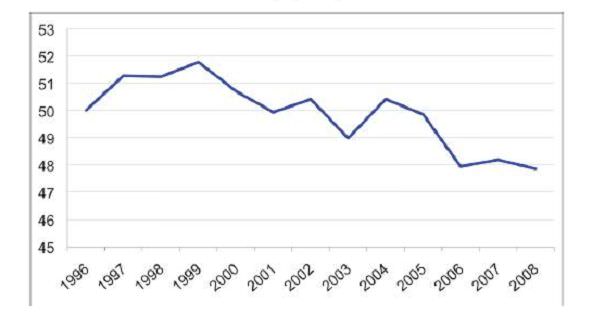 Figure 6. Personal Disposable Income as Share of GDP (in percent) 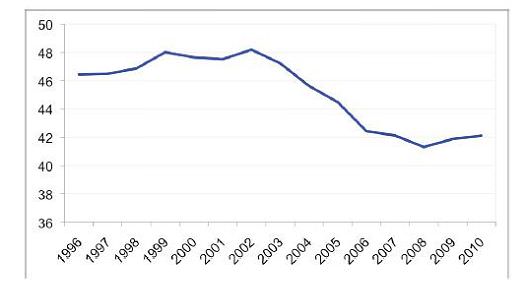 Why is it so difficult to boost private consumption ?

The financial crisis in 2008 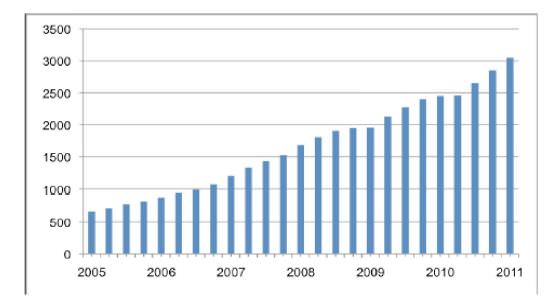 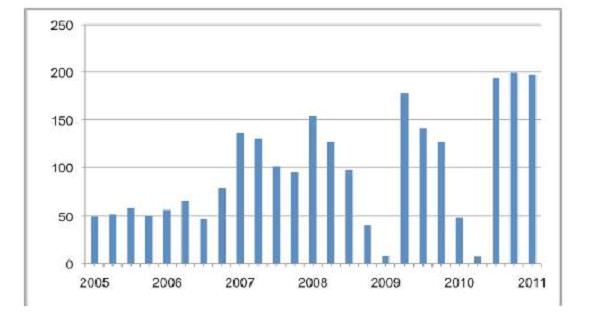 Benefits of making use of offshore markets

Is the level of government debt sustainable?

Solutions to build a sustainable economy 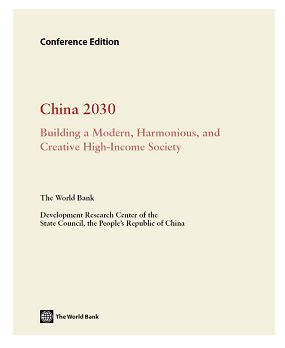 NEW POLICIES ON FDI IN CHINA

The 2010 State Council Opinions confirmed that the Foreign Investment Catalogue would be revised to encourage foreign investment in:

Foreign investment in high polluting and high-energy-consuming projects or in industries already suffering from overcapacity, would be restricted

Improvements to the Investment Environment for Foreign Investors

The seven SEIs are:

Compared to the 2007 catalogue, the New Catalogue :

Encourage transformation and upgrading of the manufacturing industry

Promotion of the development of service industries

Relationship with other industrial policies and Bilateral Treaties

FDI made in RMB subject to the same rules and regulations governing foreign investment as investments made in foreign currencies, including the requirement for approvals from Central MOFCOM or its provincial counterparts

Additional documents to be submitted for RMB FDI are:

Relaxation of withholding tax on earnings of foreign companies

…come from mineral resources in China

Sample of an exploration permit 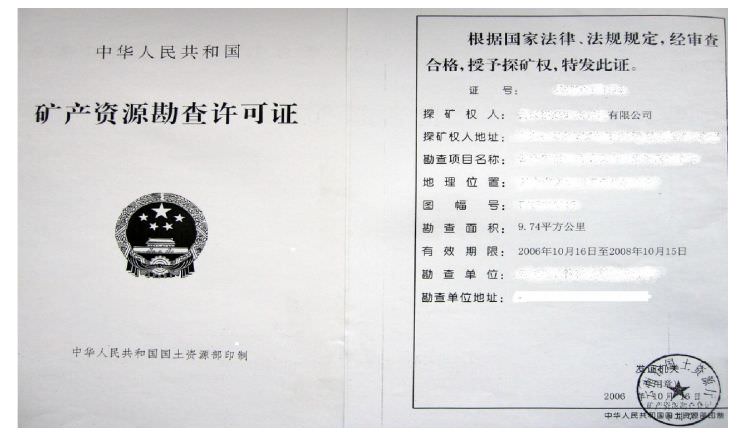 Sample of a mining right permit 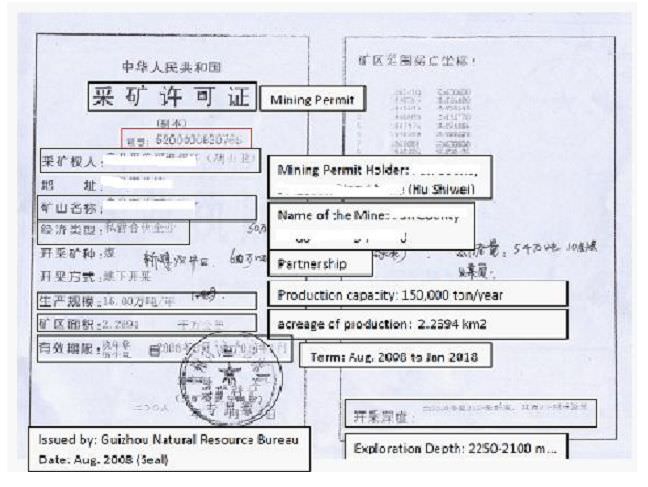 Since April 2010, any encouraged projects with investment less than USD 300 million can be approved at local level instead of central government level

To date, 15 mergers have been approved subject to conditions

“Monopoly agreements” = agreements, decisions or other concerted behaviour that eliminate or restrict competition

Specific types that are prohibited:

AND business operators must be able to prove:

Where monopoly agreement not yet implemented – fine of up to RMB500,000

Trade associations that breach AML by facilitating the entering into of anti-monopoly agreements by members – fine up to RMB500,000 or loss of authorisation status

Abuse of a Dominant Market Position

Business operators with a dominant market position prohibited from:

Abuse of a Dominant Market Position

“Dominant market position” = position of a business operator able to:

Rebuttable presumption of a dominant market position previously where:

NDRC Rules give examples of prohibited pricing agreements between competitors:

Except for charging substantially higher prices than competitors, under NDRC Rules there is no abuse if business operators can justify conduct

Sales below cost can be justified for:

Refusing to trade by setting “extraordinarily” high or low prices justified if counterparty:

Further detail of types of prohibited conduct on part of administrative bodies:

Important cases to be handled by NDRC

Merger Control: Notification of a Concentration of Business Operators

“Concentration of Business operators” is:

No notification is required:

Provisions on the Notification of Concentrations of Business Operators:

Transaction cannot be implemented until cleared

Conditions can be structural (e.g. divestiture of assets or business) or behavioural (e.g. providing access to technology or terminating exclusive agreements)

Rationale behind the possible changes

In assessment of whether concentration will eliminate or restrict competition, MOFCOM considers:

MOFCOM also able to consider whether any party is facing bankruptcy

But MOFCOM can approve a concentration if parties can prove that:

Conditions may be structural and/or behavioural

Google was required to:

Google and Motorola were required to keep Motorola’s pre-existing commitment to license its patents on fair, reasonable and non-discriminatory terms.

Lesson from four years of enforcement history of AML

Lesson from four years of enforcement history of AML

Penalties for Failure to Notify a Concentration

Sanctions for failure to file

MOFCOM will introduce 2 new rules on merger control in 2012:

Rules on Civil Litigation Under the AML

Judicial Interpretation regarding Civil Litigation Under the AML

Jurisdiction: intermediate courts of the capital cities of the provinces and autonomous region, the cities specifically designated by the state plan, municipalities directly under the administration of the central government and those designated by the Supreme Court

Eligible plaintiffs: Broad approach to eligibility, availability of joinder of actions and joinder of parties

New system set out in 2 sets of provisions:

Rules on the Merger and Acquisition of Domestic Enterprises by Foreign Investors (“M&A Rules”) implemented in September 2006 already require a “national economic security” review where foreign investors acquire control of a Chinese company if: (i) the acquisition might affect “national economic security”; (ii) the Chinese company is involved in a “key” industry; or (iii) the acquisition could result in the change of ownership of well-known or traditional Chinese brands

For M&A of Chinese enterprises in category (2) above, transaction only requires national security review if foreign investor would acquire “actual control”

Foreign investor will acquire actual control if it becomes the controlling shareholder or de facto controller of the Chinese enterprise, which it will do in following circumstances:

(Contrast under M&A Rules: MOFCOM clarified in December 2008 guidance that a foreign investor’s purchase of equity of an existing FIE is not subject to the M&A Rules)

Relevant Factors in the Security Review

Circular 53 makes clear that in determining whether an M&A transaction should be the subject of a national security review, MOFCOM will look at the substance and actual impact of the transaction, rather than just its form

Specifies that foreign investors should not seek to avoid national security review process by any means, including, without limitation, use of nominee shareholding structures, trusts, multi-level investment and reinvestment structures, leases, loans, contractual control arrangements and offshore transactions

The national security review process can be commenced in one of 3 ways:

Prior to filing an application, foreign investor may request a meeting with MOFCOM to discuss procedural issues but results of discussion not binding on MOFCOM

The preliminary national security review of an M&A transaction involving a foreign investor is carried out by Central MOFCOM. The new regime also established an inter-ministerial panel (the “Ministerial Panel”) led by the State Council with responsibility for substantive and final review

All acquisitions covered by the M&A Rules require MOFCOM approval

M&A Rules do not apply to M&A transactions involving:

Restriction on Qualification as an FIE

M&A Rules allow new or existing shares in an overseas company (including an SPV) to be used as consideration for acquisition of a Chinese company’s shares if certain requirements are met:

Chinese co or its shareholders must engage an M&A consultant registered in China to conduct due diligence as to accuracy of application documents, the financial status of overseas company and compliance with M&A Rules

Central MOFCOM approval required for a transaction which results in foreign investors acquiring actual control of a Chinese enterprise and which:

In August 2009, MOFCOM amended M&A Rules to bring anti-competitive provisions into line with the applicable thresholds under the Anti-Monopoly Law

Accordingly, an acquisition of a Chinese enterprise by a foreign investor must be reported to MOFCOM if

A typical VIE structure is illustrated in the following diagram:

Recent views of the HKSE: Listing Decision 43-3 revised in August 2012 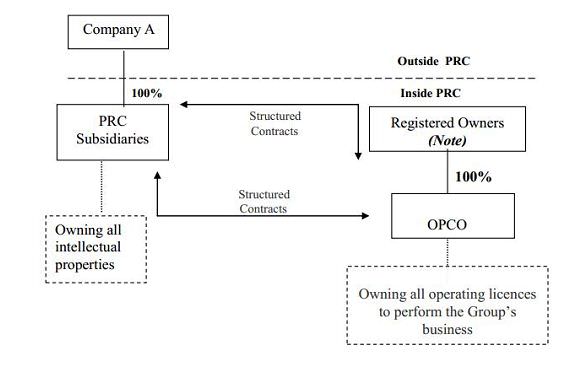 The Registered Owners were controlling shareholders of Company A 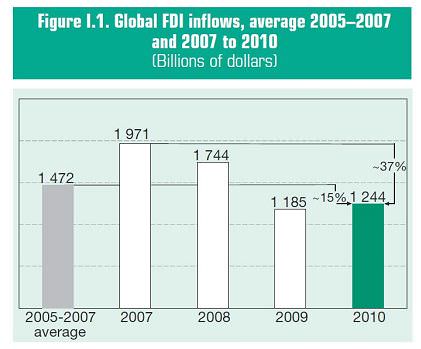 Source: UNCTAD, based on annex table l.1 and the FDI/TNC database (www.unctad.org/fdistatistics). 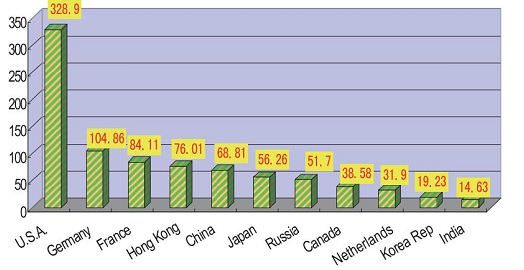 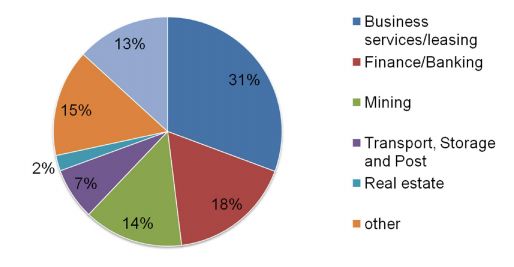 NDRC approval at the central level is required for the following investments:

NDRC’s confirmation prior to submitting bids:

Investment environment: the US

Mainland Enterprises (Main Board and GEM)

Source: the Shanghai and Shenzhen Exchanges

TREND OF CHINESE IPO ACTIVITIES IN 2011

IPO market cools down after 2010

Comparison of Listing Requirements between IPOs and Backdoor Listing

New Rules on Asset Acquisition by way of Share Issue

The roadmap to full internationalisation 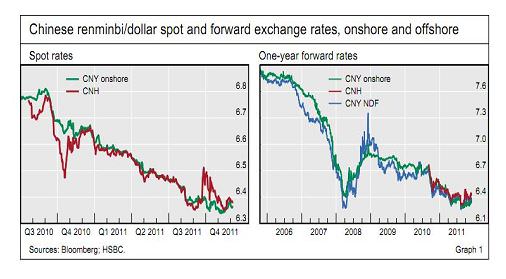 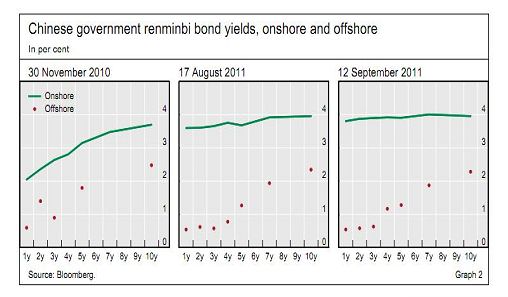 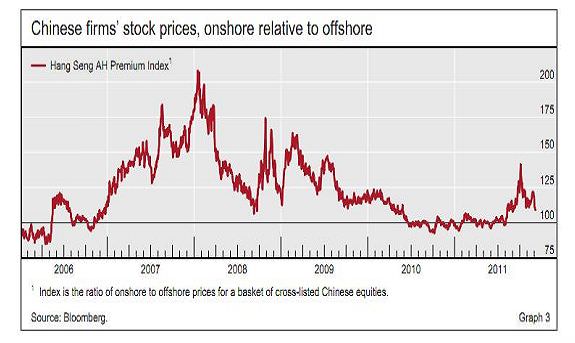 The Risks of RMB internationalisation

Challenges to China with internationalisation

Some updates on the future of Dim Sum Bonds 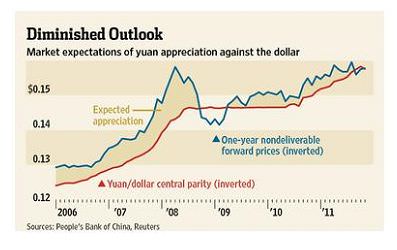 Issuance by offshore branch or subsidiary guaranteed by an onshore entity

Source: extracted from Review of the PRC Bankruptcy Law in 2009 by INSOL International

Lack of use of the Law by PRC Courts:

Lack of use of the Law by enterprises:

The Law – Lack of Clarity on Burden of proof

Judicial Interpretations – Unable to Repay Debts as they Fall Due

Examples of Improper Application of the Bankruptcy Law

Judicial Interpretations – Dealing with Improper Application of the Bankruptcy Law

Examples of Improper Application of the Bankruptcy Law:

Examples of Improper Application of the Bankruptcy Law 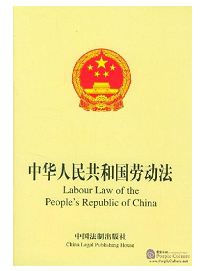 Concept of an employment relationship

During probation, wages cannot be below (Article 20 of LCL): 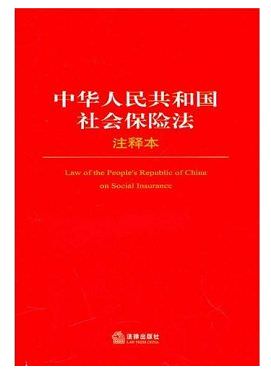 OTHER RECENT CHANGES TO CHINA’S COMPANY AND BUSINESS LAWS

Liability: FIPs can be either: 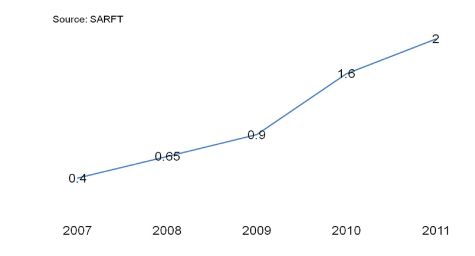 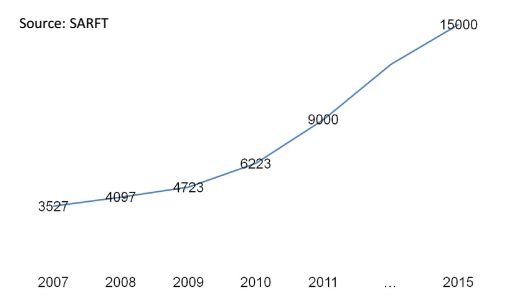 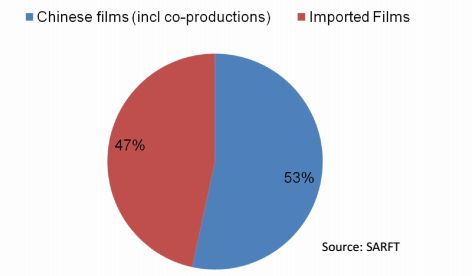 Department responsible for the film industry:

The State Administration of Radio, Film and Television

Co-production: Which mode to adopt?

A new US – China deal

Ways to get away…

HK as the gateway to China – CEPA 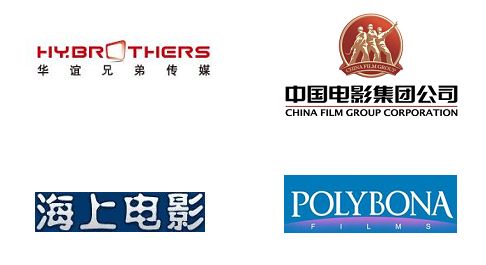 The Provisions on the Takeover of Domestic Enterprises by Foreign Investors