After considering submissions from the public, the SFC and the Exchange published their Consultation Conclusions.   A new Listing Policy Panel will be established (instead of the proposed Listing Policy Committee) as an advisory, consultative and steering body on listing policy with broader regulatory or market implications.  The role of the Listing Committee under the Listing Rules will not change, and the Listing Regulatory Committee proposed in the Consultation Paper will not be established.  The SFC, as part of its statutory oversight function, will conduct an enhanced, published supervisory audit or review of the Exchange’s performance of its listing function.  The Exchange will conduct a separate consultation in 2018 on the review of listing decisions.

In the Consultation Paper, there was a proposal to establish a Listing Policy Committee to decide on listing policy, replacing the Listing Committee as the oversight body of the listing function.

Market respondents raised concerns regarding the proposed Listing Policy Committee.  In particular, there was a major concern that the SFC’s participation in the Listing Policy Committee would merge the roles of the SFC and the Exchange.  It was suggested in the Consultation Conclusions that such a body would enable a more efficient process for establishing policy proposals at an earlier stage thereby ensuring consensus between the SFC and the Exchange on policy decisions.

In the case of sufficiently advanced proposals which are likely to be of interest to the Listing Policy Panel, approval will be first sought from the Listing Committee, and where necessary, approval by the Exchange’s board, and followed by approval by the SFC’s board.  There will be a written record of views, advice or recommendations of Listing Policy Panel members, which will be communicated to the Listing Committee, the Exchange’s board and the SFC’s board.

Listing Policy Panel members will attend meetings as representatives of their respective organisations.

A summary of the Listing Policy Panel’s policy work and recommendations will be made publicly available on the individual websites of the SFC and the Exchange.

The formation of the Listing Policy Panel will not limit the SFC’s powers to direct the Exchange to make or amend Listing Rules pursuant to section 23 of the Securities and Futures Ordinance (Cap. 571) (SFO), and to issue statutory rules concerning listing matters under section 36 of the SFO, after consulting with the Financial Secretary and the Exchange.  Nor will the creation of the new Listing Policy Panel affect the Exchange’s power to make Listing Rules in accordance with section 23 of the SFO, subject to the SFC’s approval under section 24.  Further, the Listing Committee will continue with its current role under the Listing Rules.

In the Consultation Paper, there was a proposal to establish a Listing Regulatory Committee to decide on matters in relation to initial public offerings (IPOs) and post-IPO matters that have suitability concerns or broader policy implications.   Following the consultation process, the SFC and the Exchange have decided not to establish the Listing Regulatory Committee.  Instead:

The existing procedures will continue to apply to Hong Kong IPO applications which will be received by the Exchange and filed with the SFC.  The Exchange will process and vet such applications under the usual procedures.

An important development is that in vetting Hong Kong IPO applications, the SFC will no longer review and comment on a listing application once it is determined that the case does not raise concerns under the SMLR.

In all cases where a “letter of mindedness to object” (LOM) is or is likely to be issued, the SFC will discuss its concerns directly with the applicant and its advisers.

Where the SFC is of the opinion that it is more likely than not that, given the known facts and circumstances, an objection would be raised under the SMLR, it will promptly issue the applicant an LOM, including detailed reasons for the SFC’s concerns.  Before issuing an LOM, the SFC will canvass with the applicant its concerns and potential grounds for issuing an LOM, and may require further clarification from the applicant.  The SMLR specifies various time periods in which the SFC may make requests for information, LOMs and objection notices.

The SFC and the Exchange will coordinate and cooperate in the listing process by keeping each other informed of their respective comments and queries on a listing application and their discussions with the applicant and its advisers, including supplying each other with all relevant correspondence.

The SFC will notify the Listing Department and the applicant as soon as practicable where issues raised in an LOM have been addressed satisfactorily.  Similarly, the Listing Department will notify the SFC as soon as practicable where potential issues that may lead them to reject a listing application have been addressed satisfactorily.

Where the SFC issues an LOM, the Exchange will continue to have the discretion to suspend, resume or continue its own vetting process irrespective of whether the SFC’s concerns in the LOM have been addressed.

Where the SFC is of the opinion that an applicant’s submission(s) in response to the LOM are inadequate, it will issue a final decision notice (FDN) under the SMLR, which is reviewable by the Securities and Futures Appeal Tribunal (SFAT).

Under the SFC’s new approach to performing its dual-filing function, it will provide its concerns under the SMLR as well detailed reasons directly to the applicant.

Whereas the Exchange has sole responsibility for interpreting the Listing Rules, including the “suitability” requirement, it is the SFC that will deal with the grounds for objection under the SMLR.

FDNs issued pursuant to the SMLR will be routinely published by the SFC on its website.  The SFC has the discretion to publish an FDN either on an anonymised basis or on a delayed basis where disclosure of the issuer’s identity would be unduly prejudicial to its interests or the decision is price sensitive.

Although SFC staff may assist in pre-IPO enquires particularly in relation to potential concerns under the SMLR, this should not be a routine practice or otherwise it may create a parallel, duplicative application process.

The following diagrams sourced from the Consultation Conclusions illustrate the SFC’s previous and new practices in relation to the processing of IPO applications: 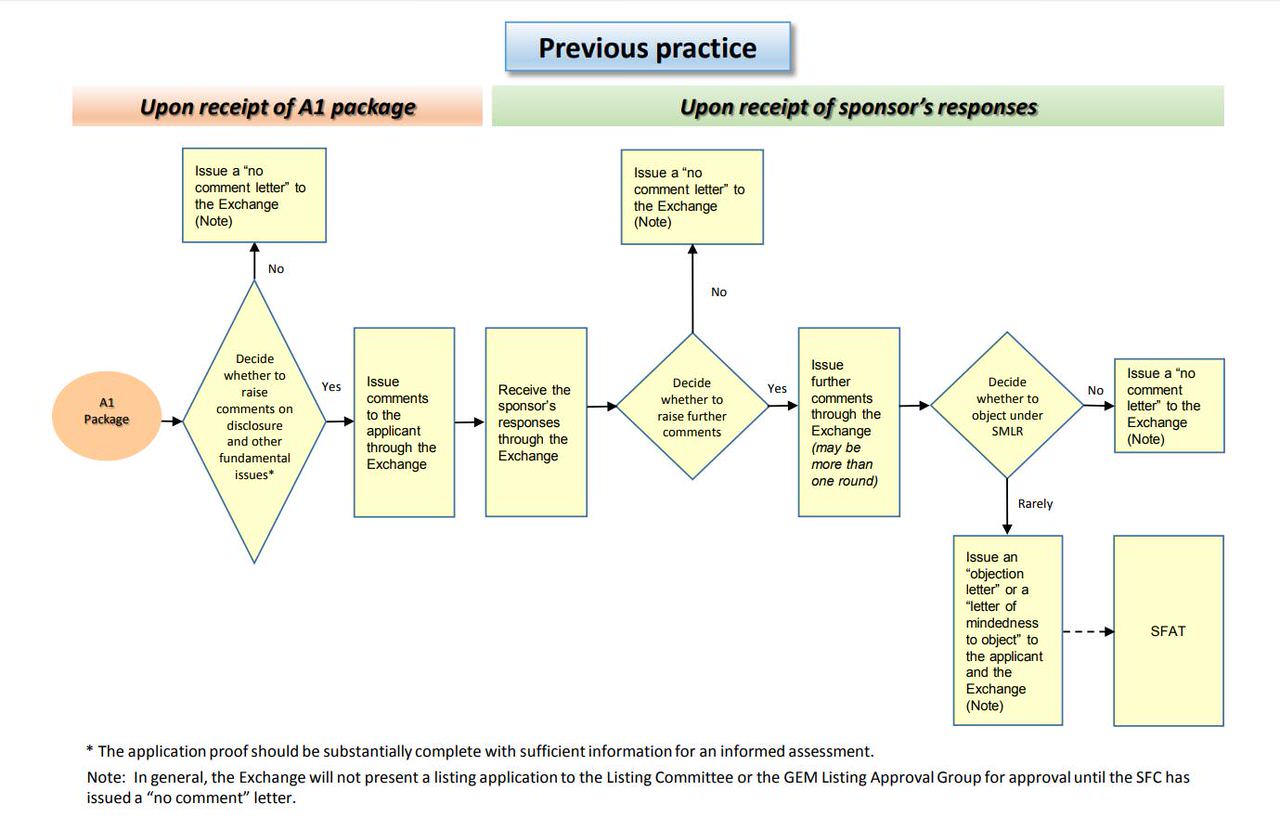 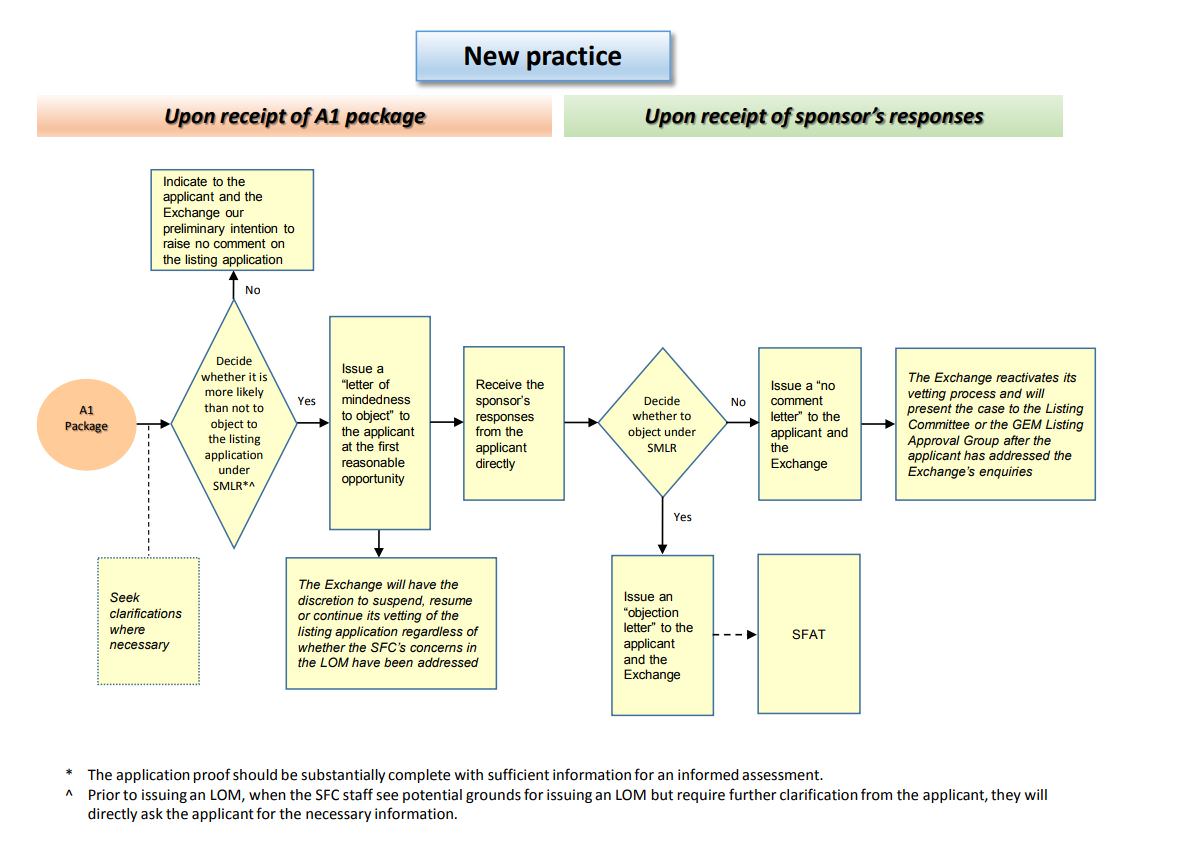 Whereas the Exchange is a regulator for matters prescribed by the Listing Rules, which do not have statutory effect, the SFC performs its functions pursuant to the SFO and the SMLR, which have the force of law and a broader jurisdiction.

The Consultation Conclusions state that the SFC has been engaging in targeted, early intervention to carry out its statutory functions regarding post-IPO matters.  The Consultation Conclusions further state that the SFC has a critical role in regulating directly listing matters that fall within the scope of the SMLR or the SFO.  The SFC has a number of powers under the SFO, and may use its cooperation arrangements with the China Securities Regulatory Commission to procure regulatory assistance in the Mainland to carry out its statutory functions.

The Exchange has an ongoing responsibility for making decisions under its own Listing Rules in relation to post-IPO matters.  The Exchange is responsible for administering, monitoring and taking action to enforce compliance by listed issuers and other relevant persons with its Listing Rules.

In the meantime, the Listing (Review) Committee, the Listing Appeals Committee and other aspects of the current system for the review of listing decisions will remain unchanged.

The SFC has an oversight function as the statutory regulator of The Stock Exchange of Hong Kong Limited (Exchange) and the Hong Kong Exchanges and Clearing Limited (HKEX).  Under section 5(a)(b) of the SFO, it has a function to supervise, monitor and regulate the activities carried on by the Exchange (a recognized exchange company) and by the HKEX (a recognized exchange controller).

The SFC and the Exchange are of the view that it would be better for the SFC to enhance its supervisory function of auditing or reviewing the Exchange’s performance of its listing function.  There will be a focus on:

The SFC’s supervisory audit or review reports will be published periodically.

Under the separate consultation, the Exchange will propose that any new independent review committee(s’) decisions, including their reasons, would be routinely published.

The proposed Listing Disciplinary Chairperson Group will not be established.  The SFC will audit or review the Exchange’s enforcement of compliance with the Listing Rules (see ‘Oversight of the Listing Function’ above).

Summary of the Main Consultation Proposals and Conclusions

The following table is a summary of the main consultation conclusions sourced from Appendix 1 of the Consultation Conclusions.

1. The grounds for the SFC to raise objection to a listing application are set out in section 6(2) of the SMLR.

SFC Supervisory Function over the Exchange Securities and Futures Ordinance