The Hong Kong Monetary Authority (HKMA) and the Bank of Thailand published a Report on a joint Central Bank Digital Currency (CBDC) research project, Project Inthanon-LionRock, on 22 January 2020. The project studied the use of central bank digital currency in cross-border payments and developed a Thai baht-Hong Kong dollar cross-border corridor network prototype to allow participating banks in Hong Kong and Thailand to transfer funds and conduct foreign exchange transactions on a peer-to-peer basis, which assists in reducing settlement layers. The successful completion of the study has confirmed the technical feasibility of implementing practical solutions to address key pain points in cross-border payments.

CBDCs have been under discussion in a number of jurisdictions, with China’s digital renminbi likely to be first off the starting block. The People’s Bank of China has reportedly filed 84 patents relating to the issue and supply of digital renminbi, an interbank settlement system for the CBDC and the integration of digital currency wallets with retail bank accounts.[1]  However, as noted in the Bank for International Settlements January 2020 report,[2] while some 80% of the central banks surveyed are engaged in CBDC-related work, only 10% of these have developed pilot projects and all of these are central banks of emerging market economies (using the IMF World Economic Outlook’s country classification). CBDCs fall into two broad categories: wholesale CBDC – a restricted access token used for wholesale settlements (such as interbank payments) – and general use CBDC which would be available to the public and could be used in retail transactions among others. While China’s planned digital renminbi would be a general use CBDC, the Hong Kong and Thai CBDCs looked at by Project Inthanon-LionRock would be wholesale CBDC used only to settle cross-border payments.

Project Inthanon-LionRock was a follow-up to the Memorandum of Understanding signed between the HKMA and the Bank of Thailand in May 2019, which was aimed at fostering collaboration between Hong Kong and Thailand in developing financial innovation, fintech and cross-border payment. Under the Hong Kong-Thailand Memorandum of Understanding, HKMA and the Bank of Thailand are collaborating on the referral of innovative business, information and experience sharing, and joint innovation projects. Project Inthanon-LionRock is a product of the collaboration between the two regulatory authorities, which applies the knowledge and experience gained from their respective CBDC research studies, HKMA’s Project LionRock and the Bank of Thailand’s Project Inthanon.

In this Hong Kong-Thailand CBDC model, the central bank is the sole issuer of its currency, and the wholesale CBDC is only tokenised and redeemed against the issuing central bank, namely, the HKMA and the Bank of Thailand. Thus the HKMA will issue digital HK$ tokens to banks in exchange for Hong Kong dollars and will redeem the tokens for Hong Kong dollars. The Central Bank of Thailand performs the same role with respect to Thai Baht. Participating banks then distribute the tokens to their corporate customers to make wholesale payments to other banks or companies. The domestic settlement networks are separated from cross-border transactions, non-resident banks are not allowed to access the domestic network and hold respective wholesale CBDC. 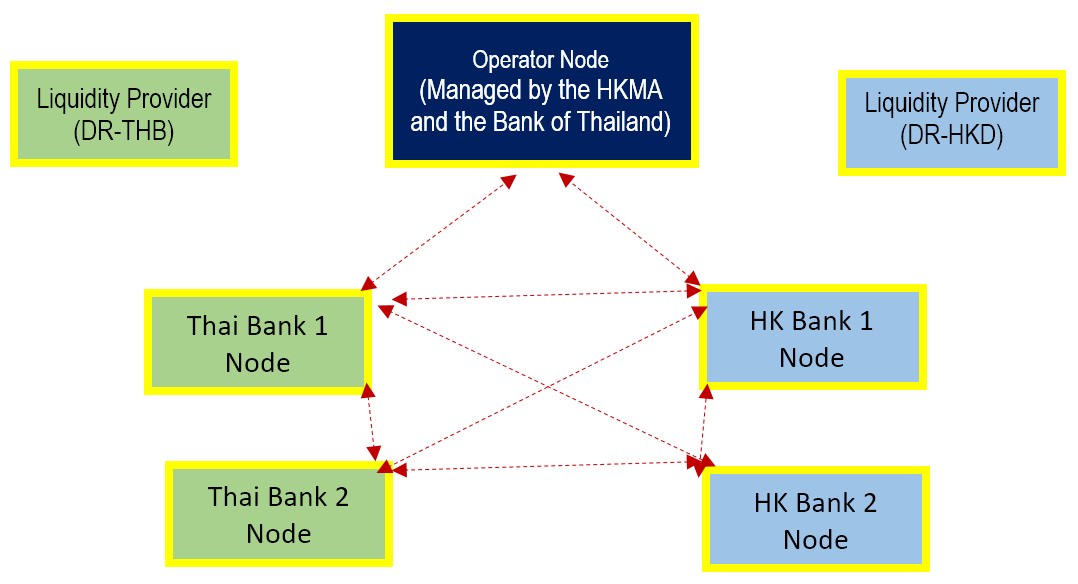 With the overall aim of enhancing the efficiency of cross-border funds transfers and foreign exchange transactions, the proposed corridor network (as described above) is designed to provide six key functionalities:

In preparing for the next stage of the study – a full production-grade system in a sandbox environment – the HKMA and Bank of Thailand envisage elaborating on a number of legal, operational and technical matters.

In terms of future legal and regulatory considerations, the Project Inthanon-LionRock report highlights the importance of anti-money laundering given its role as a pillar in global financial crime policing. The system should support anti-money laundering practices to enhance efficiency in overseeing suspicious transactions. Also, the report found that the future build-out should scrutinise the onboarding of new regulations and continue periodic revision of existing regulations to adapt to the continuously changing regulatory environment in Hong Kong, Thailand and other jurisdictions. Besides, legal claims to central banks and financial data privacy concerns should also be included to outline escalation and remediation protocols for such claims and issues.

The following table summarises the outcomes of Project Inthanon-LionRock and how it compares with the current correspondent bank model.